Last Updated on 7 months by websitehindi

Cricket is one of the simplest games in the World. The game’s widespread popularity makes it one of the most watched sports on television screens. However, being such a well-accepted game, most people are not so familiar with all the rules that encompass a simple game of cricket.

As of modern-day, cricket has evolved into several new formats, with the basics sticking to the very origins of the game. Online cricket took center stage during the pandemic and produced a new challenge and entertainment for the fans. Apart from knowing the actual rules of the sport, you had to learn new online tricks and ways of winning in the fantasy cricket league. In light of recent competitions and updates, you should read more about fantasy cricket tips and tricks to better the rivals you meet online.

Rules of Cricket Every Player Should Keep in Mind

Let’s check out the game’s rules and clear our knowledge of the game before diving into the unending realm of cricket playing. 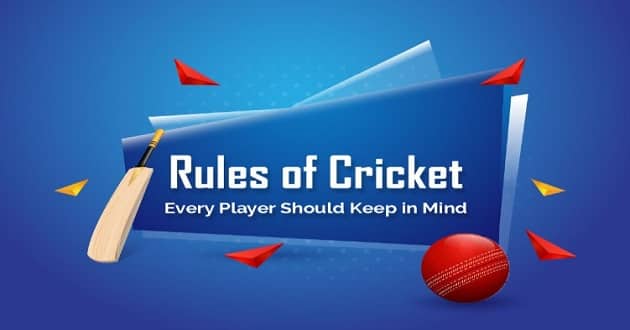 The primary objective of playing cricket is getting a score more than your opponent’s team to grab a win for your cricket team. To win a cricket match, the batting side has to hit the ball played by the opposite team and score runs on the board. If you are playing on the bowling/fielding side of the team, then your aim should be to bowl out the entire team before they reach the target set by you, and if they are batting first, keep them at the lowest score possible.

Several methods come into play around this single objective that are adages to the game a player has to learn. The batting and bowling rules are interchanged when the batting side loses all their wickets, the playing overs are up, or the game time runs out.

How to Score in Cricket

There are several ways the batting side can earn runs in a cricket game. However, the central aspect includes hitting the ball first with the bat. When the bowler throws the ball, the player has to hit it strategically to bypass fielders and gain good ground on the playing field. As the fielders chase the ball, the two batsmen on opposite sides of the pitch have to exchange their position by running between the wickets, which gains them a single run or a couple.

If the player can hit the ball well enough and it makes its way across the boundary, then the player is awarded four runs. If the player directly hits the ball with enough power and the ball lands outside the stadium without a single bounce, then it counts as six runs for the player, which is the maximum a batsman can score in a single ball.

There are also ways in which the bowler’s faults in bowling aid in the increase of runs for the batting side. This includes a wide ball, where the ball is outside the legal range, a no ball, where the bowler oversteps the line before throwing the ball, and finally, a bye run where no one touches the thrown ball. Still, the batsmen keep running between the wickets until a fielder can retrieve the ball and throw it to the fielders near the pitch.

Equipment Used in the Game

The game is played in an almost round field with the central batting pitch extending to 22 yards. Each team has 11 players in the game who take up different roles.
The central wickets on the opposite side of each pitch have three stumps. The bowler bowls from one side of the crease to the other.
Since the ball used in cricket is quite hard, players use a lot of guards to protect themselves from any fatal impact. This protection includes thigh guards, leg guards, a helmet, and a chest guard, mainly for the batsmen facing the bowler.

There are several roles in a cricket team, and most of these are activated when the side is in the bowling and fielding position. The primary role among the players is that of the captain. In cricket, the captain is not only chosen based on his ability to instruct the team, their roles, and control the pace of the game, but in most cases, he is an allrounder who can manage to switch to any position in the playing ground. The vital position is of the batsman in a cricket team who gives the team a winning score.

Batsmen at the top of the lineup have to be capable of hitting any ball, be it a spinner or a fast-paced yorker. The middle order of the roster is filled with bowlers and players who have definitive control over both aspects of batting and bowling but are focused more on bowling. The last role is of the wicketkeeper, which is placed behind the batsman to catch the ball if the batsman misses it or knocks it to the side. This position is one of the most important and requires lightning-fast reflexes.

All rules and regulations surrounding the game of cricket must be learnt by heart before diving into the game. The rules are not complex to remember, and players can learn them just by playing a few matches. Rules of any game are pretty helpful as they determine how you will take the game and win it. The player who keeps in mind all rules of cricket has a better chance of winning it than others who might be skilled but are not familiar with the more intricate aspects of the game.